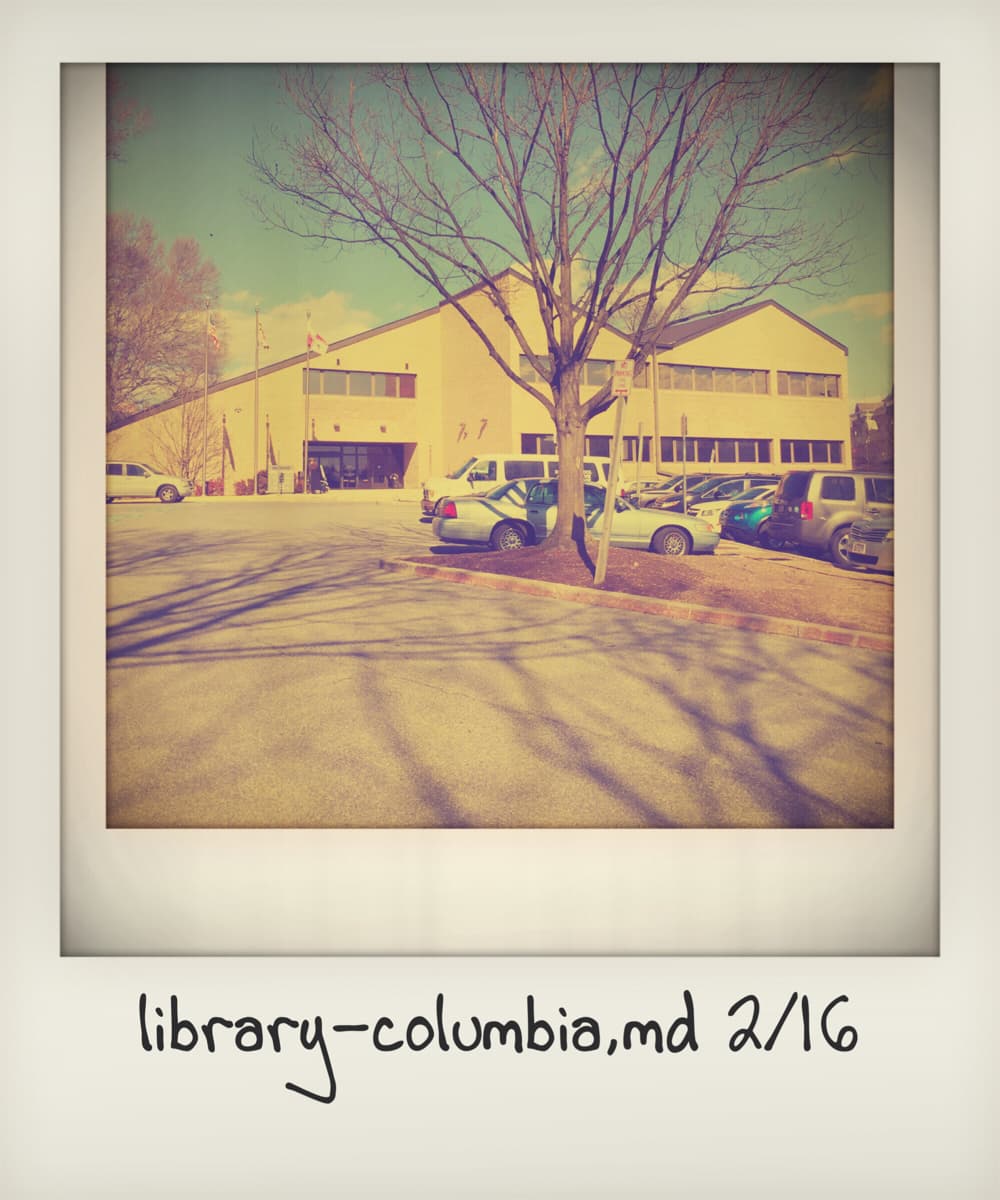 The trees are bare and the landscape is brown in February in Columbia, MD and yet, the buildings still recede into the background. I arrived to open spaces and wide roadways that are immaculately maintained by groundskeepers dressed in matching green uniforms that mirror those of suburban mall groundskeepers. That should come as no surprise since Columbia was manifest by developer James 'Jim' Rouse out of 14,178 acres of Maryland farmland. A case can be made that Jim Rouse is the father of the suburban "Mall" though others in the field are put forth for that honor too by their proponents. My first response is to say that Jim Rouse was more than a Mall developer but that would impinge a concept that changed the face of suburban living. "Hanging out at the mall" was and is the favorite pastime of teenagers all over American and seniors have created walking programs that are centered in their local malls. In suburbs all across the United States, the mall is the town square, the city center.

Jim Rouse was a man of vision and an individual who had the drive and resources to erect an entire city where none had existed before. As a young boy Michael Chabon, creator of literary worlds, watched daily as a city sprung from the abstract to the concrete. According to Business Insider, Michael Chabon is Washington, DC's most famous author and while Chabon was born in DC, he claims Columbia was the place that made the most impact on him growing up. Chabon plans and creates stories of texture, color and meaning out of his imagination. He watched as Rouse created a city out of brick and mortar from his imagination.

In 1967 Rouse put into motion a plan for a city that was remarkable for multiple reasons. The racial unrest of Baltimore specifically and the decay of American cities generally formed his vision for another kind of city. Columbia was to be privately funded and as such followed a corporate structure in its development. A vision statement, private management and the idea of citizenship and personal responsibility came together to form the vision for Chabon's childhood home.   The vision statement crafted at its inception included commitment to green spaces, racial diversity and to "provide the best possible environment for the growth of people". These are certainly lofty goals when most towns and cities are mainly focused on getting the garbage picked-up.

Chabon's father was the first to receive a VA loan to build a home in the new city. The local paper covered the news with excitement as Columbia was taking form.  I smile as I think about today's social media gurus who tout branding and marketing as though it were a current day creation. Rouse understood the need for personal and professional branding and marketing as a tool to reach a goal. In 1970, seven year old Chabon moved into his new house and neighborhood along with hundreds of other like-minded families. I can imagine the excitement of making new friends and being at all the "firsts". The first day at a new schools, the opening of the first centrally located library in Columbia, the first office building and all the other first that were witness by Michael Chabon and his family and friends.

How does a place shape a child and what values will he or she inculcate regardless of what is said by the adults around them? As parents, educators and therapist that question is asked daily and we look for "signs" to give us insight. In Michael Chabon first novel, The Mysteries of Pittsburgh, Art Bechstein, the reluctant hero of his own life, struggles to put into words the goal of "evolution, of men and of women" by simply stating "a manifestation of the will-to-bigness". Rouse wasn't going to just build a planned community; he was going to do what no one had done in the United States before, build a planned city from scratch. As a writer, Michael Chabon wasn't just going to tell a story, he was going to create a world.

I am going to write more about Chabon's, the writer, tomorrow but first I must go clothes shopping. Yes, I am letting you see behind the curtain. I was born in North Carolina and raised in Jacksonville, Florida but I am surprised every time I come south in the winter how warm and muggy it is. I have two bathing suits with me but no other warm weather clothes. On the plus side the humidity evens out the small wrinkles, though I do have a few wrinkles that even putting my head into a bucket of water wouldn't help. Until later...

PS: Bloggers are given a good deal more freedom than traditional journalist and educators when writing for the Internet but I am uncomfortable not sourcing some of the things I say. I also don't want to sound like a textbook so I am going to attempt to land somewhere in the middle. Most of the facts and dates on Columbia in this piece came from the booklet COLUMBIA AT 20-A Renewed Idealism March 22, 1987 6:00 PM The Kttamaqundi Room, The Rouse Company, Columbia, Maryland. Some very nice people at the local library found this for me in the reference area along with other materials. You may have a little difficulty finding said booklet - unless you want to take a road trip - to fact check this piece because you will need to go to the Howard County Library System-Main Branch to secure the hardcopy.  Also I met with a lovely woman by the name of Barbara Kellner at the Columbia Archives and together we discussed Columbia, its history, Jim Rouse, urban planning and planning for the Fourth Quarter of life.